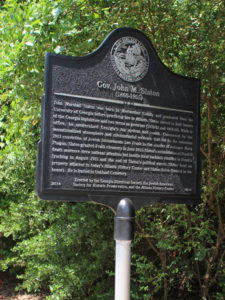 Marker Text: John Marshall Slaton was born in Meriwether County and graduated from the University of Georgia before practicing law in Atlanta. Slaton served in both houses of the Georgia legislature and two terms as governor (1911-12 and 1913-15). While in office, he modernized Georgia’s tax system and roads. Concerned by the sensationalized atmosphere and circumstantial evidence that led to the notorious 1913 conviction of Jewish businessman Leo Frank in the murder of teenager Mary Phagan, Slaton granted Frank clemency in June 1915. Slaton’s commutation of Frank’s death sentence drew national attention but hostile local backlash resulted in Frank’s lynching in August 1915 and the end of Slaton’s political career. Slaton lived on property adjacent to today’s Atlanta History Center and Slaton Drive (named in his honor). He is buried in Oakland Cemetery.