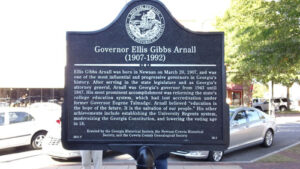 Marker Text: Ellis Gibbs Arnall was born in Newnan on March 20, 1907.  Ellis Gibbs Arnall and was as one of the most influential and progressive Governors in Georgia’s history. After serving in the state legislature and as Georgia’s attorney general, Arnall was Georgia’s governor from 1943 until 1947.  His most prominent accomplishment was reforming the state’s college education system, which had lost accreditation under former Governor Eugene Talmadge.  Arnall believed “education is the hope of the future.  It is the salvation of our people.”  His other achievements include establishing the University Regents system, modernizing the Georgia Constitution, and lowering the voting age to 18.

Tips for Finding This Marker: At the courthouse in Newnan