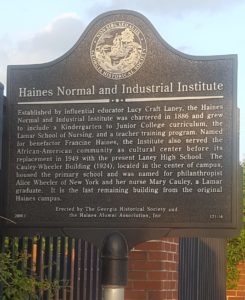 Marker Text: Established by influential educator Lucy Craft Laney, the Haines Normal and Industrial Institute was chartered in 1886 and grew to include a Kindergarten to Junior College curriculum, the Lamar School of Nursing, and a teacher training program. Named for benefactor Francine Haines, the Institute also served the African-American community as cultural center before its replacement in 1949 with the present Laney High School. The Cauley-Wheeler Building (1924), located in the center of campus, housed the primary school and was named for philanthropist Alice Wheeler of New York and her nurse Mary Cauley, a Lamar graduate. It is the last remaining building from the original Haines Campus.

Erected by the Georgia Historical Society and the Haines Alumni Association, Inc.

Tips for Finding This Marker: At the intersection of Laney Walker Boulevard and Phillips Street in Augusta