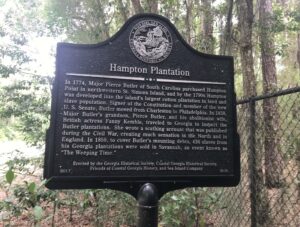 Marker Text: In 1774 Major Pierce Butler of South Carolina purchased Hampton Point in northwestern St. Simons Island, and by the 1790s Hampton was developed into the island’s largest cotton plantation in land and slave population. Signer of the Constitution and member of the new U. S. Senate, Butler moved from Charleston to Philadelphia. In 1838 Major Butler’s grandson, Pierce Butler, and his abolitionist wife, British actress Fanny Kemble, traveled to Georgia to inspect the Butler plantations. She wrote a scathing account that was published during the Civil War, creating much sensation in the North and in England. In 1859, to cover mounting debts, 436 slaves from Butler’s Georgia plantations were sold in Savannah, an event known as “The Weeping Time.”