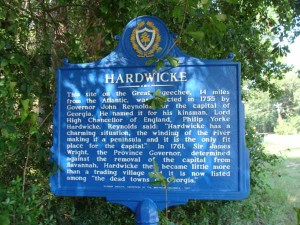 Hardwicke: This site on the Great Ogeechee, 14 miles from the Atlantic, was selected in 1755 by Governor John Reynolds for the capital of Georgia. He named it for his kinsman, Lord High Chancellor of England, Philip Yorke Hardwicke. Reynolds said: “Hardwicke has a charming situation, the winding of the river making it a peninsula and it is the only fit place for the capital.” In 1761, Sir James Wright, the Province Governor, determined against the removal of the capital from Savannah. Hardwicke then became little more than a trading village and it is now listed among “the dead towns of Georgia.”

Tips for Finding This Marker: On GA 144 Spur, east of GA 144 in Richmond Hill