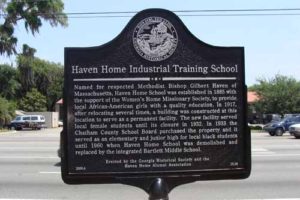 Marker Text: Named for respected Methodist Bishop Gilbert Haven of Massachusetts, Haven Home School was established in 1885 with the support of the Women’s Home Missionary Society, to provide local African-American girls with a quality education. In 1917, after relocating several times, a building was constructed at this location to serve as a permanent facility. The new facility served local female students until its closure in 1932. In 1933 the Chatham County School Board purchased the property and it served as an elementary and junior high for local black students until 1960 when Haven Home School was demolished and replaced by the integrated Bartlett Middle School.

Erected by the Georgia Historical Society and the Haven Home Alumni Association.

Tips for Finding This Marker: At 207 East Montgomery Cross Road in Savannah