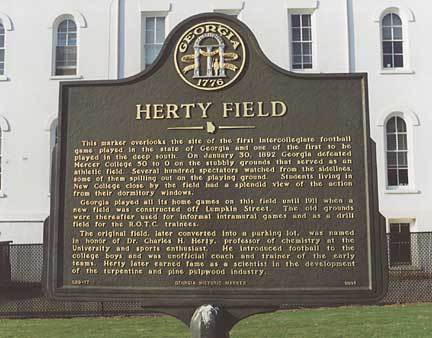 Marker Text: This marker overlooks the site of the first intercollegiate football game played in the state of Georgia and one of the first to be played in the deep south. On January 30, 1892 Georgia defeated Mercer College 50 to 0 on the stubbly grounds that served as an athletic field. Several hundred spectators watched from the sidelines, some of them spilling out on the playing ground. Students living in New College close by the field had a splendid view of the action from their dormitory windows.

Georgia played all its home games on this field until 1911 when a new field was constructed off Lumpkin Street. The old grounds were thereafter used for informal intramural games and as a drill field for the R.O.T.C. trainees.

The original field, later converted into a parking lot, was named in honor of Dr. Charles H. Herty, professor of chemistry at the University and sports enthusiast. He introduced football to the college boys and was unofficial coach and trainer of the early teams. Herty later earned fame as a scientist in the development of the turpentine and pine pulpwood industry.

Tips for Finding This Site: Behind Moore and New College Buildings at the end of Herty Dr., University of Georgia in Athens.