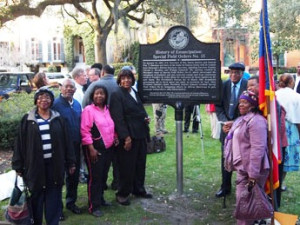 Erected for the Civil War 150 commemoration by the Georgia Historical Society, the Georgia Battlefields Association and the Georgia Department of Economic Development

Tips for Finding This Site: Madison Square. Harris and Bull Streets, Savannah. Across the street from the Green-Meldrim house.