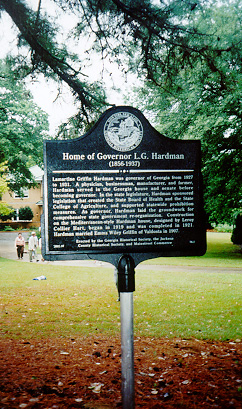 Marker Text: Lamartine Griffin Hardman was governor of Georgia from 1927 to 1931. A physician, businessman, manufacturer, and farmer, Hardman served in the Georgia house and senate before becoming governor. In the state legislature, Hardman sponsored legislation that created the Sate Board of Health and the State College of Agriculture, and supported statewide prohibition measures. As governor, Hardman laid the groundwork for comprehensive state government re-organization. Construction on the Mediterranean-style Hardman house, designed by Leroy Collier Hart, began in 1919 and was completed in 1921. Hardman married Emma Wiley Griffin of Valdosta in 1907.

Tips for Finding This Site: On GA 98 in Commerce, GA