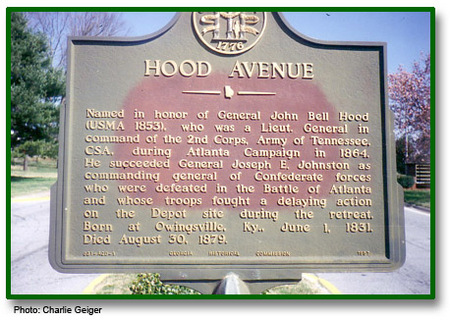 *Marker Text: Named in honor of General John Bell Hood (USMA 1853), who was a Lieut. General in command of the 2nd Corps, Army of Tennessee, CSA, during Atlanta Campaign in 1864. He succeeded General Joseph E. Johnston as commanding general of Confederate forces who were defeated in the Battle of Atlanta and whose troops fought a delaying action on the Depot site during the retreat.

Tips for Finding This Site: Located at Murray Drive near Iverson Gate in Fort Gillem.