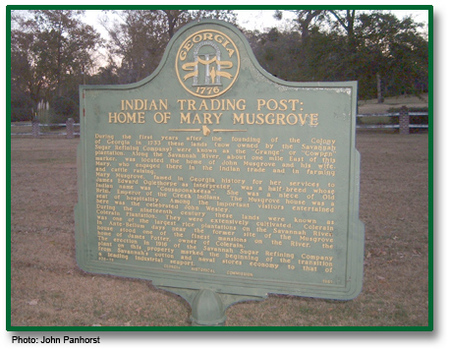 Marker Text: During the first years after the founding of the Colony of Georgia in 1733 these lands (now owned by the Savannah Sugar Refining Company) were known as the “Grange” or “Cowpen” plantation. Along the Savannah River, about one mile East of this marker, was located the home of John Musgrove and his wife, Mary, who engaged there in the Indian trade and in farming and cattle raising.

Mary Musgrove, famed in Georgia history for her services to James Edward Oglethorpe as interpreter, was a half-breed whose Indian name was “Cousaponakeesa”. She was a niece of Old Brim, Emperor of the Creek Indians. The Musgrove house was a seat of hospitality. Among the important visitors entertained here was the celebrated John Wesley.

During the nineteenth century these lands were known as Colerain Plantation. They were extensively cultivated. Colerain was one of the largest rice plantations on the Savannah River. In Ante-Bellum days near the former site of the Musgrove house stood one of the finest mansions on the River, the home of James Potter, owner of Colerain.

The erection in 1916 of the Savannah Sugar Refining Company plant on this property marked the beginning of the transition from Savannah’s cotton and naval stores economy to that of a leading industrial seaport.

Tips for Finding This Site: On U.S. 17 at the former Savannah Sugar Refining Co., Savannah
To learn more about this marker topic, visit our Hidden Histories online exhibit.