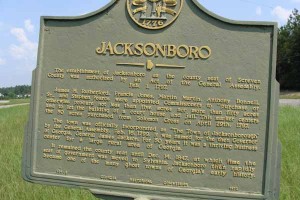 xt: The establishment of Jacksonboro as the county seat of Screven County was authorized by an Act of the General Assembly, Feb. 1, 1797.

James H. Rutherford, Francis Jones, Martin Martin, Anthony Bonnell, Sr., and Stephen Pearce were appointed Commissioners to “purchase or otherwise procure not less than five acres nor more than fifty acres and to let the building of a court house and jail.” This marker centers the 50 acres purchased from Solomon Gross on April 29th, 1797.

The town was officially incorporated as “The Town of Jacksonborough” by the General Assembly, Feb. 16, 1799. It was named for the then Governor of Georgia, General James Jackson. For 50 years it was a thriving business center for a large rural area of Georgia.

It remained the county seat until Dec. 14, 1847, at which time the seat of government was moved to Sylvania. Jacksonboro then rapidly became one of the many ghost towns of Georgia’s early history.