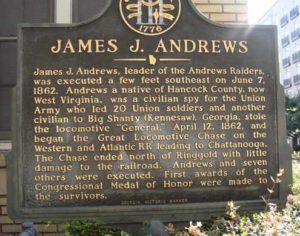 Marker Text: James J. Andrews, leader of the Andrews Raiders, was executed a few feet southeast on June 7, 1862. Andrews a native of Hancock County, now West Virginia, was a civilian spy for the Union Army who led 20 Union soldiers and another civilian to Big Shanty (Kennesaw), Georgia, stole the locomotive “General,” April 12, 1862, and began the Great Locomotive Chase on the Western and Atlantic RR leading to Chattanooga. The Chase ended north of Ringgold with little damage to the railroad. Andrews and seven others were executed. First awards of the Congressional Medal of Honor were made to the survivors.

Tips for Finding This Site: At the intersection of Juniper St. and Third st. in Atlanta