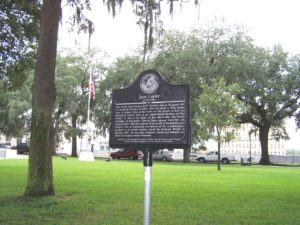 Marker Text: Jane Cuyler (born Jeanne de la Touche) came to Savannah with her husband Teleman in 1768. After his death in 1772, Cuyler took in lodgers, first at her home on the corner of Bull and Broughton Streets, then at an undetermined location on Bay Street. It was at her home on Bay Street that she hosted meetings of Savannah’s Liberty Boys, among them her son Henry Cuyler. After the capture of Savannah by the British, Jane Cuyler’s role in supporting the efforts of the revolutionaries resulted in an arrest warrant issued by Governor Wright in January 1781. By that time, however, Cuyler had followed the advice of friends and fled Savannah.

Tips for Finding This Site: located on Bay Street in Emmett Park between Habersham and Price Streets, Savannah