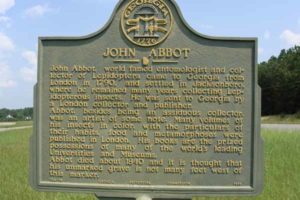 Marker Text: John Abbot, world famed entomologist and collector of Lepidoptera came to Georgia from London in 1790, and settled in Jacksonboro, where he remained many years collecting Lepidopterous insects. He was sent to Georgia by a London collector and publisher.

Abbot, besides being an assiduous collector, was an artist of some note. Many volumes of his insects in color, with the particulars of their habits, food and metamorphoses were published in London. His books are the prized possessions of many of the world’s leading Universities and Museums.

Abbot died about 1840 and it is thought that his unmarked grave is not many feet west of this marker.