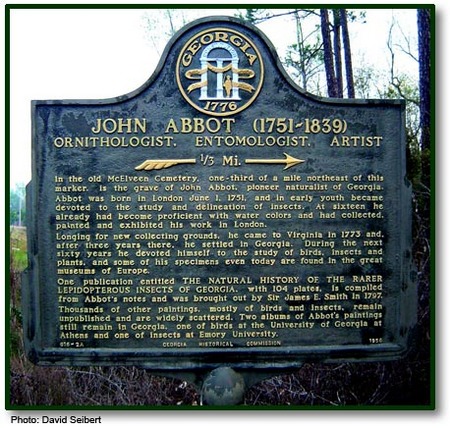 Courtesy of the Carl Vinson Institute of Government

Marker Text: In the old McElveen Cemetery, one-third of a mile northeast of this marker, is the grave of John Abbot, pioneer naturalist of Georgia. Abbot was born in London June 1, 1751, and in early youth became devoted to the study and delineation of insects. At sixteen he already had become proficient with water colors and had collected, painted and exhibited his work in London.

Longing for new collecting grounds, he came to Virginia in 1773 and, after three years there, he settled in Georgia. During the next sixty years he devoted himself to the study of birds, insects and plants, and some of his specimens even today are found in the great museums of Europe.

One publication entitled The Natural History of the Rarer Lepidopterous Insects of Georgia, with 104 plates, is compiled from Abbot’s notes and was brought out by Sir James E. Smith in 1797. Thousands of other paintings, mostly of birds and insects, remain unpublished and are widely scattered. Two albums of Abbot’s paintings still remain in Georgia, one of birds at the University of Georgia at Athens and one of insects at Emory University.

Tips for Finding This Site: On Arcola Rd. about 1 mile south of U.S. 80 in Brooklet.