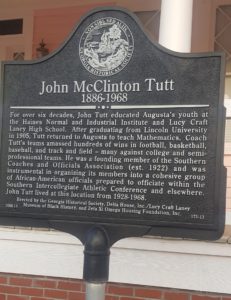 Marker Text: For over six decades, John Tutt educated Augusta’s youth at the Haines Normal and Industrial and Lucy Craft Laney High School. After graduating from Lincoln University in 1905, Tutt returned to Augusta to teach Mathematics. Coach Tutt’s teams amassed hundreds of wins in football, basketball, baseball, and track and field – many against college and semi-professional teams. He was a founding member of the Southern Coaches and Officials Association (est. 1922) and was instrumental in organizing its members into a cohesive group of African-American officials prepared to officiate within the Southern Intercollegiate Athletic Conference and elsewhere. John Tutt lived at this location from 1928-1968.

Tips for Finding This Site: Museum of Black History, 1108 Phillips St. in Augusta