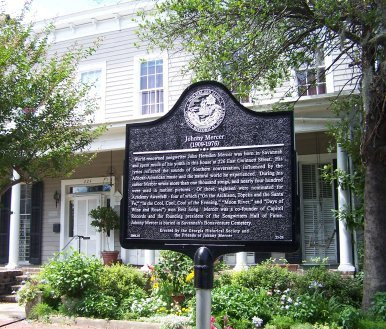 Marker Text: World-renowned songwriter John Herndon Mercer was born in Savannah and spent much of his youth in this house at 226 East Gwinnett Street. His lyrics reflected the sounds of Southern conversation, influenced by the African-American music and the natural world he experienced. During his career Mercer wrote more than one thousand songs, and nearly four hundred were used in motion pictures. Of these, eighteen were nominated for Academy Awards® — four of which (“On the Atchison, Topeka and the Santa Fe,” “In the Cool, Cool, Cool of the Evening,” “Moon River,” and “Days of Wine and Roses”) won Best Song. Mercer was a co-founder of Capitol Records and the founding president of the Songwriters Hall of Fame. Johnny Mercer is buried in Savannah’s Bonaventure Cemetery (fig. 1).

Tips for Finding This Marker: At the northwest corner of the intersection of Lincoln Street and East Gwinnett Street in Savannah.
To learn more about this marker topic, visit our Hidden Histories online exhibit.