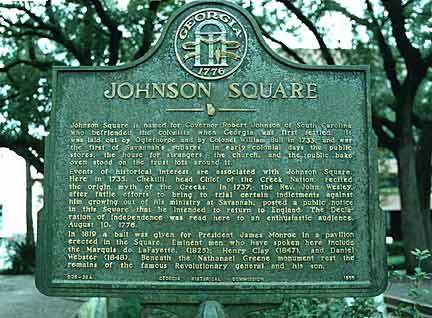 Marker Text: Johnson Square is named for Governor Robert Johnson of South Carolina who befriended the colonists when Georgia was first settled. It was laid out by Oglethorpe and by Colonel William Bull in 1733, and was the first of Savannah’s squares. In early colonial days the public stores, the house for strangers, the church, and the public bake oven stood on the trust lots around it.

Events of historical interest are associated with Johnson Square. Here in 1735, Chekilli, head Chief of the Creek Nation, recited the origin myth of the Creeks. In 1737, the Rev. John Wesley, after futile efforts to bring to trial certain indictments against him growing out of his ministry at Savannah, posted a public notice in this Square that he intended to return to England. The Declaration of Independence was read here to an enthusiastic audience, August 10, 1776.

In 1819 a ball was given for President James Monroe in a pavilion erected in the Square. Eminent men who have spoken here include the Marquis de LaFayette, (1825); Henry Caly (1847), and Daniel Webster (1848). Beneath the Nathanael Greene monument rest the remains of the famous Revolutionary general and his son.

Tips for Finding This Site: On Johnson Square, on Bull Street between Congress and St. Julian Streets in Savannah.