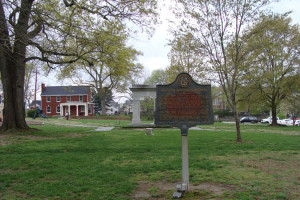 Marker Text: Born April 15, 1821 in Pickens district, South Carolina, he grew up in Union County, Georgia. He taught to pay for his education and while teaching in Canton he read law at night, being admitted to the bar in August, 1845.

He graduated from the Yale Law School and practiced law in this city. He was elected State Senator in 1849; Judge of the Superior Court, Blue Ridge Circuit, in 1855; Governor in 1857, serving during the trying years of the War Between the States until 1865.

He was Chief Justice of the Georgia Supreme Court from 1868 to 1870, resigning to become manager of the Western and Atlantic Railroad.

He was President of the Dade Coal Company, and had other large mining interests and owned several farms. He was elected United States Senator in 1880; then elected for a second term.

In memory of his son, Charles McDonald Brown, he established a $50,000 scholarship at the University of Georgia.

Governor Brown died November 30, 1894. His Canton home stood near this marker. After his death his heirs presented this tract to the city for a park, fittingly named Brown Park.

Tips for Finding This Site: In the city park on Marietta St. in Canton.