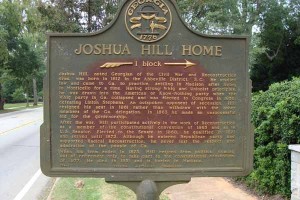 Marker Text: Joshua Hill, noted Georgian of the Civil War and Reconstruction, was born in 1812 in the Abbeville District, S.C. He studied law and came to Ga. to practice, settling in Madison after living in Monticello for a time. Having strong Whig and Unionist principles, he was drawn into the American or Know-Nothing party when the Whig party in Ga. collapsed and was elected to Congress in 1856, defeating Linton Stephens. An outspoken opponent of secession, Hill resigned his seat in 1861 rather than withdraw with the other members of the Ga. delegation. In 1863 he made an unsuccessful bid for the governorship.

After the war, Hill participated actively in the work of Reconstruction as a member of the constitutional convention of 1865 and as a U.S. Senator. Elected to the Senate in 1868, he qualified in 1871 and served until 1873. Although he entered Republic party and supported Radical Reconstruction, he never lost the respect and admiration of the people of Ga.

When his term ended in 1873, Hill retired from politics, coming out of retirement only to take part in the constitutional convention of 1877. He died in 1891 and is buried in Madison.