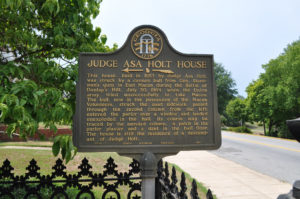 Marker Text: This house, built in 1853 by Judge Asa Holt, was struck by a cannon ball from Gen. Stoneman’s guns in East Macon during the Battle of Dunlap’s Hill, July 30, 1864, when the Union army tried unsuccesfully to take Macon. The ball, now in the possession of the Macon Volunteers, struck the sand sidewalk, passed through the second column from the left, entered the parlor over a window and landed unexploded in the hall. Its course may be traced by the mended column, a patch in the parlor plaster and a dent in the hall floor. The house is still the residence of a descendant of Judge Holt.

Tips for Finding This Site: Mulberry Street parkway in Macon.