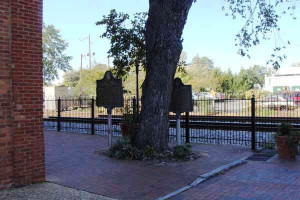 Marker Text: In ante-bellum days, this hotel was a summer resort for planters attracted by the gay social activities of the town. In 1862, J. J. Andrews and his Federal raiders met here to begin the daring Locomotive Chase. Confederate wounded were fed and treated here after many battles, and civilian refugees from overrun Tennessee and Kentucky stayed here, moving south as Federals drew near. July 3, 1864, Sherman had his headquarters in the hotel, while directing pursuit of the Confederates retiring into Atlanta. After the War, numerous northern visitors wintered in Marietta, many stopping at the Kennesaw House.

Tips for Finding This Site: In front of Marietta History Museum, east of RR tracks in Marietta.