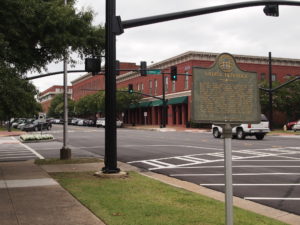 Marker Text: A muzzle loading cannon cast in Columbus in 1861 from brass contributed by the ladies of the city from their domestic furnishings and utensils. Used about a year in the Confederate Artillery, it was captured by Federal troops at Shiloh, Tenn., April 6, 1862 and was probably used by them against the Confederate forces. For a number of years Ladies Defender was exhibited as a war trophy in an armory in Chicago. It was there seen by R. Dan McEachery, of Columbus, who wrote L. H. Chappell, captain of the Columbus Guards. The gun was later placed in the National Cemetery at Shiloh, Tenn. An effort was initiated by Columbus to have the gun restored to its home city. In 1904, by an Act of Congress, Ladies Defender was returned to the City of Columbus.