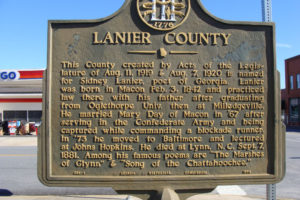 Marker Text: This County created by Acts of the Legislature of Aug. 11, 1919 & Aug. 7, 1920 is named for Sidney Lanier, poet of Georgia. Lanier was born in Macon Feb. 3, 1842 and practiced law there with his father after graduating from Oglethorpe Univ. then at Milledgeville. He married Mary Day of Macon in ’67 after serving in the Confederate Army and being captured while commanding a blockade runner. In ’73 he moved to Baltimore and lectured at Johns Hopkins. He died at Lynn, N.C. Sept. 7, 1881. Among his famous poems are “The Marshes of Glynn” & “Song of the Chattahoochee.”

Tips for Finding This Site: At the courthouse in Lakeland, Ga.