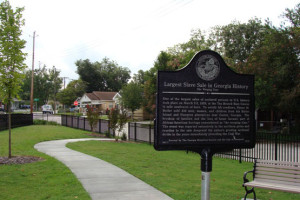 Marker Text: One of the largest sales of enslaved persons in U.S. history took place on March 2-3, 1859, at the Ten Broeck Race Course 1/4 mile southwest of here. To satisfy his creditors, Pierce M. Butler sold 436 men, women, and children from his Butler Island and Hampton plantations near Darien, Georgia. The breakup of families and the loss of home became part of African-American heritage remembered as “the weeping time.” The event was reported extensively in the northern press and reaction to the sale deepened the nation’s growing sectional divide in the years immediately preceding the Civil War.

Erected by the Georgia Historical Society and the City of Savannah

Tips for Finding This Site: Southwest of the intersection of Dunn Street and Augusta Road in Savannah.