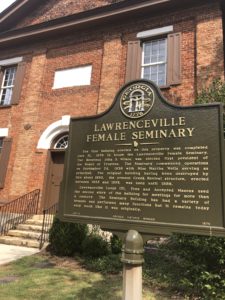 Marker Text: The first building erected on this property was completed July 31, 1838 to house the Lawrenceville Female Seminary. The Reverend John S. Wilson was elected first president of the Board of Trustees. The Seminary commenced operations on September 24, 1838 with Miss Martha Wells serving as principal. The original building having been destroyed by fire about 1850, the present Greek Revival structure, erected between 1853 and 1855, was used until 1886.

Lawrenceville Lodge 131, Free and Accepted Masons used the second story of the building for meetings for more than a century. The Seminary Building has had a variety of tenants and performed many functions but it remains today very much like it was originally.

Tips for Finding This Site: At 455 South Perry Street in Lawrenceville