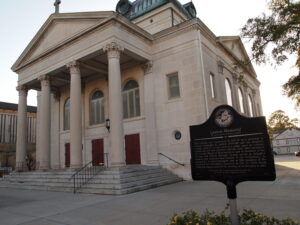 Marker Text: This building was constructed in 1897-98 as a memorial to General Alexander R. Lawton (1818-96) and his daughter, Corrine (1844-77). It was used as a public space for cultural, educational and civic purposes until the 1930s. After serving in the Georgia House of Representatives and as president of the Georgia and Atlantic Railroad, Lawton served as Brigadier General and Quartermaster-General of the Confederacy, as ambassador to Austria- Hungary, and as fifth president of the American Bar Association. Chartered in 1907, St. Paul’s Greek Orthodox Church acquired the building as its Sanctuary in 1941.

Tips for Finding This Marker: Southwest of intersection of Anderson and Bull Streets in Savannah.
To learn more about this marker topic, visit our Hidden Histories online exhibit.