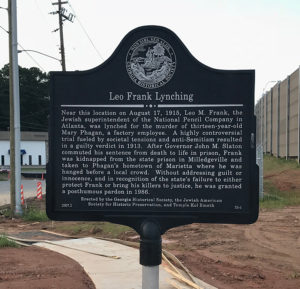 Marker Text: Near this location on August 17, 1915, Leo M. Frank, the Jewish superintendent of the National Pencil Company in Atlanta, was lynched for the murder of thirteen-year-old Mary Phagan, a factory employee. A highly controversial trial fueled by societal tensions and anti-Semitism resulted in a guilty verdict in 1913. After Governor John M. Slaton commuted his sentence from death to life in prison, Frank was kidnapped from the state prison in Milledgeville and taken to Phagan’s hometown of Marietta where he was hanged before a local crowd. Without addressing guilt or innocence, and in recognition of the state’s failure to either protect Frank or bring his killers to justice, he was granted a posthumous pardon in 1986.

Tips for Finding This Site: Across the street from Waffle House on Ga 120 Just W of I-75 in Marietta