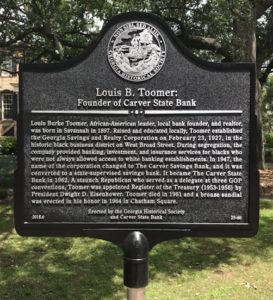 Marker Text: Louis Burke Toomer, African-American leader, local bank founder, and realtor, was born in Savannah in 1897. Raised and educated locally, Toomer established the Georgia Savings and Realty Corporation on February 23, 1927, in the historic black business district on West Broad Street. During segregation, the company provided banking, investment, and insurance services for blacks who were not always allowed access to white banking establishments. In 1947, the name of the corporation changed to The Carver Savings Bank, and it was converted to a state-supervised savings bank. It became The Carver State Bank in 1962. A staunch Republican who served as a delegate at three GOP conventions, Toomer was appointed Register of the Treasury (1953-1956) by President Dwight D. Eisenhower. Toomer died in 1961 and a bronze sundial was erected in his honor in 1964 in Chatham Square.

Erected by the Georgia Historical Society and Carver State Bank

Tips for Finding This Marker: Chatham Square in Savannah