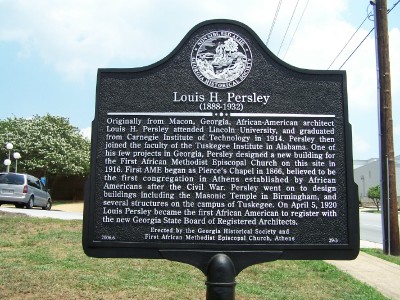 Marker Text: Originally from Macon, Georgia , African-American architect Louis H. Persley attended Lincoln University, and graduated from Carnegie Institute of Technology in 1914. Persley then joined the faculty of the Tuskegee Institute in Alabama. One of his few projects in Georgia, Persley designed a new building for the First African Methodist Episcopal Church on this site in 1916. First AME began as Pierce’s Chapel in 1866, believed to be the first congregation in Athens established by African Americans after the Civil War. Persley went on to design buildings including the Masonic Temple in Birmingham, and several structures on the campus of Tuskegee. On April 5, 1920 Louis Persley became the first African American to register with the new Georgia State Board of Registered Architects.

Tips for Finding This Site: Located at the First AME Church near Dougherty St. and N. Hull St., Athens