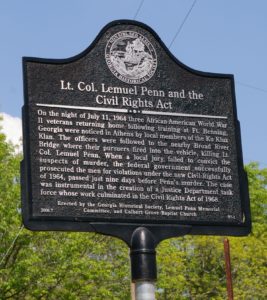 Marker Text: On the night of July 11, 1964 three African-American World War II veterans returning home following training at Ft. Benning , Georgia were noticed in Athens by local members of the Ku Klux Klan. The officers were followed to the nearby Broad River Bridge where their pursuers fired into the vehicle, killing Lt. Col. Lemuel Penn. When a local jury failed to convict the suspects of murder, the federal government successfully prosecuted the men for violations under the new Civil Rights Act of 1964, passed just nine days before Penn’s murder. The case was instrumental in the creation of a Justice Department task force whose work culminated in the Civil Rights Act of 1968.

Tips for Finding This Site: At intersection of Georgia Route 172 and Roy Wood Road.  The marker is at the Madison/Elbert County Line, at the Broad River.