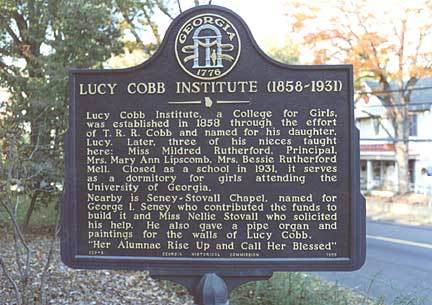 Marker Text: Lucy Cobb Institute, a College for Girls, was established in 1858 through the effort of T.R.R. Cobb and named for his daughter, Lucy. Later, three of his nieces taught here: Miss Mildred Rutherford, Principal, Mrs. Mary Ann Lipscomb, Mrs. Bessie Rutherford Mell. Closed as a school for girls in 1931, it serves as a dormitory for girls attending the University of Georgia.

Nearby is Seney-Stovall Chapel, named for George I. Seney who contributed the funds to build it and Miss Nellie Stovall who solicited his help. He also gave a pipe organ and paintings for the walls of Lucy Cobb.

“Her Alumnae Rise Up and Call Her Blessed”

(Note: Shortly after this marker was erected, the Lucy Cobb Institute was closed as a dormitory for University of Georgia female students. Subsequently, it was used as faculty offices and for other purposes until being closed in the late 1970s. Thereafter, the condition of buildings in the complex deteriorated rapidly. In the mid-1980s, Congress appropriated funding to restore the complex in recognition of former U.S. Congressman Carl Vinson. The university unit known as the Institute of Government was renamed the Carl Vinson Institute of Government. Restoration of the facility took several years, but was completed in the early 1990s, and the Institute moved into Lucy Cobb Institute complex.)