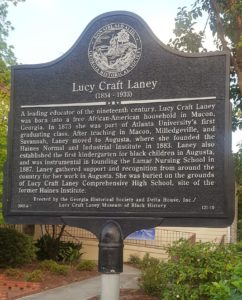 ading educator of the nineteenth century, Lucy Craft Laney was born into a free African-American household in Macon, Georgia. In 1873 she was part of Atlanta University’s first graduating class. After teaching in Macon, Milledgeville, and Savannah, Laney moved to Augusta, where she founded the Haines Normal and Industrial Institute in 1883. Laney also established the first kindergarten for black children in Augusta, and was instrumental in founding the Lamar Nursing School in 1887. Laney gathered support and recognition from around the country for her work in Augusta. She was buried on the grounds of Lucy Craft Laney Comprehensive High School, site of the former Haines Institute.

Tips for Finding This Marker:  On Phillips Street, on the right when traveling north in Augusta.