March to the Sea: Savannah

March to the Sea: Savannah 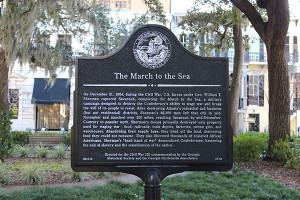 Marker Text: On December 21, 1864, during the Civil War, U.S. forces under Gen. William T. Sherman captured Savannah, completing the March to the Sea, a military campaign designed to destroy the Confederacy’s ability to wage war and break the will of its people to resist. After destroying Atlanta’s industrial and business (but not residential) districts, Sherman’s 62,500 men left that city in mid-November and marched over 250 miles, reaching Savannah by mid-December. Contrary to popular myth, Sherman’s troops primarily destroyed only property used for waging war – food, railroads, train depots, factories, cotton gins, and warehouses. Abandoning their supply base, they lived off the land, destroying food they could not consume. They also liberated thousands of enslaved African Americans. Sherman’s “hard hand of war” demoralized Confederates, hastening the end of slavery and the reunification of the nation.

Tips for Finding This Marker: In Madison Square across from St. John’s Episcopal Church
To learn more about this marker topic, visit our Hidden Histories online exhibit.