Mary Turner and the Lynching Rampage of 1918

Mary Turner and the Lynching Rampage of 1918 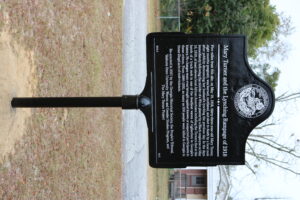 Marker Text: Five miles from this site on May 19, 1918, thirty-three-year-old Mary Turner, eight months pregnant, was burned, mutilated, and shot to death by a local mob after publicly denouncing her husband’s lynching the previous day. In the days immediately following the murder of a White planter by a Black employee on May 16, 1918, at least eleven local African Americans including the Turners died at the hands of a lynch mob in one of the deadliest waves of vigilantism in Georgia’s history. No charges were ever brought against known or suspected participants in these crimes. From 1880-1930, as many as 550 people were killed in Georgia in these illegal acts of mob violence.

Re-erected in 2021 by the Georgia Historical Society, the People’s Tribunal, Valdosta State University – Woman and Gender Studies Program, and The Mary Turner Project

Tips for Finding This Site: Located near 305 Blakely Street in Hahira.