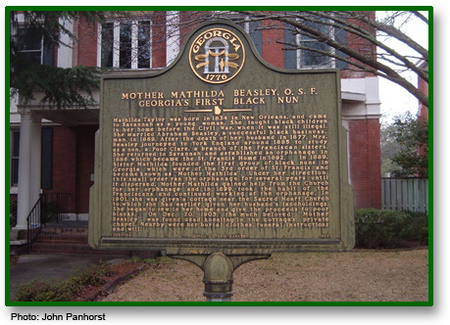 Marker Text: Mathilda Taylor was born in 1834 in New Orleans, and came to Savannah as a young woman. She taught black children in her home before the Civil War, when it was still illegal. She married Abraham Beasley, a successful black businessman, in 1869. After the death of her husband in 1877, Mrs. Beasley journeyed to York England around 1885 to study as a nun, a Poor Clare, a branch of the Franciscan sisters. She returned to Savannah and established an orphanage in 1886 which became the St. Francis Home in 1892. In 1889, Sister Mathilda founded the first group of black nuns in Georgia which were of the 3rd order of St. Francis and became known as “Mother Mathilda”. Under her direction, this small order ran the orphanage for several years until it dispersed, Mother Mathilda gained help from the Church for her orphanage and in 1899, took the habit of the Franciscans and continued working at the orphanage. In 1901, she was given a cottage near the Sacred Heart Church to which she had earlier given her husband’s landholdings. She began to sew in her home and give the proceeds to poor blacks. On Dec. 20, 1903, the much beloved “Mother Beasley” was found dead kneeling in the cottage’s private chapel. Nearby were her burial clothes, funeral instructions and will.