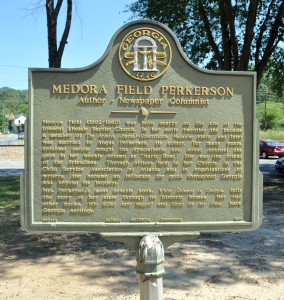 Marker Text: Medora Field (1892-1960) was born nearby on the site of the present Lindale Baptist Church. In her early twenties she became a member of The Atlanta Journal-Constitution Magazine staff, and later was married to Angus Perkerson, its editor. For many years, troubled people sought the sympathetic and sound counsel she gave in her weekly column as “Marie Rose.” She was the friend of the friendless. Through offices held in her Church, in the Child Service Association of Atlanta and in organizations of writers, she became an influence for good throughout Georgia and beyond its borders.

Mrs. Perkerson’s most notable book, White Columns in Georgia, tells the story of her state through its historic houses. Her two other books, Who Killed Aunt Maggie? and Blood on her Shoe, have Georgia settings.

Tips for Finding This Marker: At intersection of Park Avenue and West 1st Avenue in Lindale