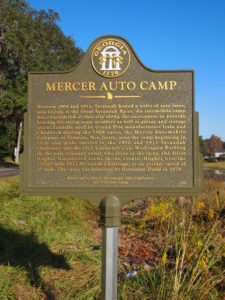 Marker Text: Between 1908 and 1911, Savannah hosted a series of auto races, now known as the Great Savannah Races. An automobile camp was constructed at this site along the racecourse to provide housing for racing team members as well as garage and storage space. Initially used by Grand Prix manufacturers Itala and Chadwick during the 1908 races, the Mercer Automobile Company of Trenton, New Jersey, used the camp beginning in 1910 and made entries in the 1910 and 1911 Savannah Challenges and the 1911 Vanderbilt Cup. Washington Roebling II, the only company owner who drove in the races, and driver Hughie Hughes led teams in the events. Hughes won the 222.82-mile 1911 Savannah Challenge, at an average speed of 70 mph. The camp was destroyed by Hurricane David in 1979.