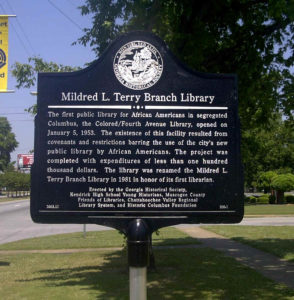 Marker Text: The first public library for African Americans in segregated Columbus, the Colored/Fourth Avenue Library, opened on January 5, 1953. The existence of this facility resulted from covenants and restrictions barring the use of the city’s new public library by African Americans. The project was completed with expenditures of less than one hundred thousand dollars. The library was renamed the Mildred L. Terry Branch in 1981 to honor its first librarian.

Tips for Finding This Site: Located at 640 Veterans Parkway in Columbus, Ga