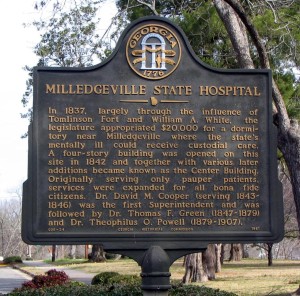 Marker Text:  In 1837, largely through the influence of Tomlinson Fort and William A. White, the legislature appropriated $20,000 for a dormitory near Milledgeville where the state’s mentally ill could receive custodial care. A four-story building was opened on this site in 1842 and together with various later additions became known as the Center Building. Originally serving only pauper patients, services were expanded for all bona fide citizens. Dr. David M. Cooper (serving 1843-1846) was the first Superintendent and was followed by Dr. Thomas F. Green (1847- 1879) and Theophilus O. Powell (1879- 1907).

Tips for Finding This Marker: At the intersection of Broad Street and the unnamed hospital entrance drive, on the right when traveling east on Broad Street in Milledgeville.