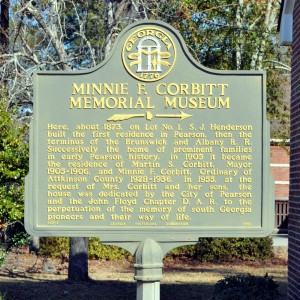 Marker Text: Here, about 1873, on Lot No. 1, S.J. Henderson built the first residence in Pearson, then the terminus of the Brunswick and Albany R. R. Successively the home of prominent families in early Pearson history, in 1905 it became the residence of Martin S. Corbitt, Mayor 1905-1906, and Minnie F. Corbitt, Ordinary of Atkinson County 1928 – 1936. In 1955, at the request of Mrs. Corbitt and her sons, the house was dedicated by the City of Pearson and the John Floyd Chapter D.A.R. to the perpetuation of the memory of south Georgia pioneers and their way of life.

Tips for Finding This Site: At the intersection of North Church and East Carter Streets in Pearson.