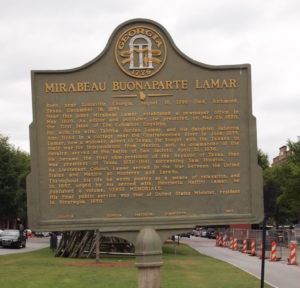 Near this point Mirabeau Lamar established a newspaper office in May 1828. As editor and publisher, he presented, on May 19, 1828, the first issue of the Columbus Enquirer.

He, with his wife, Tabitha Jordan Lamar, and his daughter, Rebecca Ann, lived in a cottage near the Chattahoochee River. In June 1833, Lamar, now a widower, moved to Texas. He fought with the Texans in their war for independence from Mexico, and, as commander of the cavalry, served at the battle of San Jacinto, April 21, 1836.

As Lieutenant Colonel, Lamar served in the War between the United States and Mexico at Monterey and Loredo.

Throughout his life he wrote poetry as a means of relaxation, and in 1857, urged by his second wife, Henrietta Maffitt Lamar, he published a volume, VERSE MEMORIALS.

His final public service was that of United States Minister, resident in Nicaragua, 1858.

Tips for Finding This Marker: In the median of Broadway just south of 12th St, in Columbus