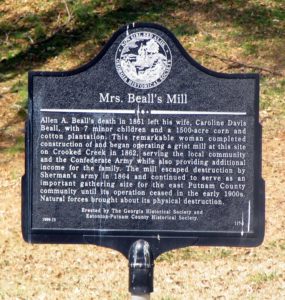 Marker Text: Allen A. Beall’s death in 1861 left his wife, Caroline Davis Beall, with 7 minor children and a 1500-acre corn and cotton plantation. This remarkable woman completed construction of and began operating a grist mill at this site on Crooked Creek in 1862, serving the local community and the Confederate Army while also providing additional income for the family. The mill escaped destruction by Sherman’s army in 1864 and continued to serve as an important gathering site for the East Putnam County community until its operation ceased in the early 1900s. Natural forces brought about its physical destruction.