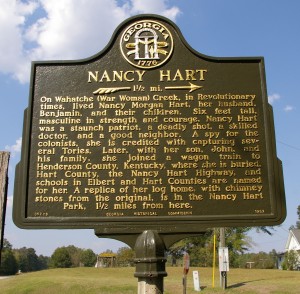 Marker Text: On Wahatche (War Woman) Creek, in Revolutionary times, lived Nancy Morgan Hart, her husband, Benjamin, and their children. Six feet tall, masculine in strength and courage, Nancy Hart was a staunch patriot, a deadly shot, a skilled doctor, and a good neighbor. A spy for the colonists, she is credited with capturing several Tories. Later, with her son, John, and his family, she joined a wagon train to Henderson County, Kentucky, where she is buried. Hart County, the Nancy Hart Highway, and schools in Elbert and Hart Counties are named for her. A replica of her log home, with chimney stones from the original, is in the Nancy Hart Park, 1 1/2 miles from here.

Tips for Finding This Marker: At intersection of Washington Highway and River Road near Elberton