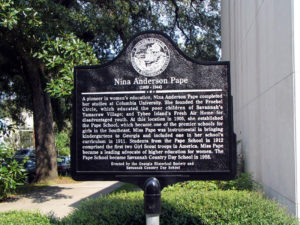 Marker Text: A pioneer in women’s education, Nina Anderson Pape completed her studies at Columbia University. She founded the Froebel Circle, which educated the poor children of Savannah’s Yamacraw Village; and Tybee Island’s Fresh Air Home for disadvantaged youth. At this location in 1905, she established the Pape School, which became one of the premier schools for girls in the Southeast. Miss Pape was instrumental in bringing kindergartens to Georgia and included one in her school’s curriculum in 1911. Students from the Pape School in 1912 comprised the first two Girl Scout troops in America. Miss Pape became a leading advocate of higher education for women. The Pape School became Savannah Country Day School in 1955.

Tips for Finding This Site: 906 Drayton Street in Savannah.
To learn more about this marker topic, visit our Hidden Histories online exhibit.