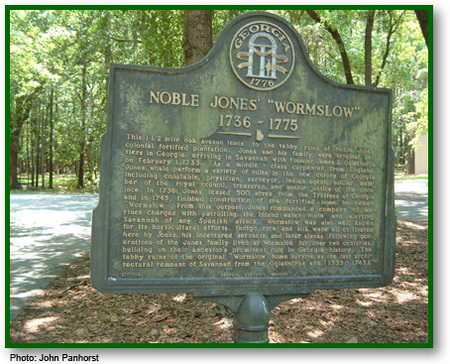 Marker Text: This 1-1/2 mile oak avenue leads to the tabby ruins of Noble Jones’ colonial fortified plantation. Jones and his family were original settlers in Georgia, arriving in Savannah with founder James E. Oglethorpe on February 1, 1733. As a middle – class carpenter from England, Jones would perform a variety of roles in the new colony of Georgia including: constable, physician, surveyor, Indian agent, soldier, member of the royal council, treasurer, and senior justice of the province. In 1736, Jones leased 500 acres from the Trustees of Georgia and in 1745, finished construction of the fortified home he named “Wormslow”. From this outpost, Jones commanded a company of marines charged with patrolling the inland water route and alerting Savannah of any Spanish attack. Wormslow was also well known for its horticultural efforts. Indigo, rice and silk were all cultivated here by Jones, his indentured servants, and later slaves. Following generations of the Jones family lived at Wormsloe for over two centuries, building on their ancestor’s prominent role in Georgia history. The tabby ruins of the original “Wormslow” home survive as the last architectural remnant of Savannah from the Oglethorpe era (1733 – 1743).