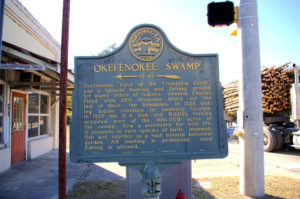 Marker Text:  Okefenokee, “Land of the Trembling Earth”, was a favorite hunting and fishing ground for many tribes of Indians. General Charles Floyd with 250 dragoons drove out the last of these, the Seminoles, in 1838 ending Indian rebellion in southern Georgia. In 1937 the U. S. Fish and Wildlife Service acquired most of the 400,000 acres of the swamp. Now a sanctuary for wild life, it abounds in rare species of birds, mammals, fish and reptiles in a vast natural botanical garden. All hunting is prohibited; some fishing is allowed.