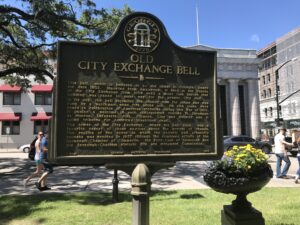 Marker Text: This bell, which is believed to the oldest in Georgia, bears the date 1802. Imported from Amsterdam, it hung in the cupola of the City Exchange from 1804 until a short time before that building was razed to make way for the present City Hall.

In its day, the bell signalled the closing time for shops and was rung by a watchman when fire broke out. Its rich tones were heard in celebration of American victories during the War of 1812. It pealed a welcome to such distinguinshed visitors to Savannah as Monroe, LaFayette, Polk, Fillmore, Clay and Webster and it tolled tributes for America’s illustrious dead.

The tower of the City Exchange, where the bell hung, was a favorite resort of those anxious about the arrival of vessels. The replica of the tower in which the historic bell presently reposes was erected in 1957 through the combined efforts of the Savannah Chamber of Commerce, the Pilot Club of Savannah and the Savannah-Chatham Historic Site and Monument Commission.

Tips for Finding This Site: In park at Bay and Drayton Streets in Savannah.
To learn more about this marker topic, visit our Hidden Histories online exhibit.