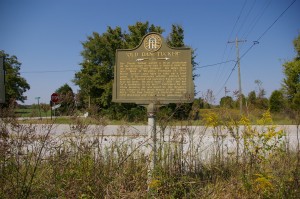 *Marker Text: Rev. Daniel Tucker owned a large plantation on the Savannah River and is buried near his old homesite, “Point Lookout,” six miles from here. Born in Virginia, February 14, 1744, Daniel Tucker came here to take up a land grant. A revolutionary soldier, planter and minister, he owned and operated Tucker’s Ferry near his home. He died April 7, 1818 — but not “of a toothache in his heel.” Esteemed by his fellow planters, he was loved by the Negroes who composed the many verses of the famous ditty, “Old Dan Tucker,” a favorite song at corn shuckings and other social gatherings.

Tips for Finding This Marker: At intersection of Calhoun Falls Highway and Pearl Mill Road near Elberton